Are You Angry Yet? 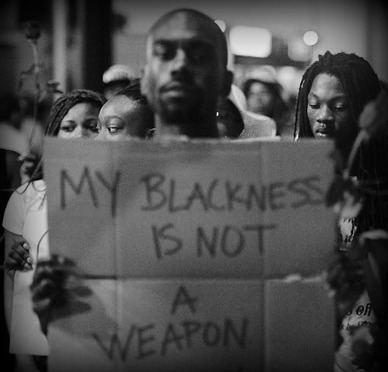 “Pardon me while I burst in to flames…”

I’m growing weary. As I sit here in the safety and comfort of privilege, I’m weary. It makes me sick. My stomach turns as I turn on the news. I feel the tears of anger well up as I watch events unfold. I feel my heart race as I hear the decision. I’m not surprised. Sadly, I’m not surprised. But I’m mad.

Michael Brown. Trayvon Martin. Jordan Davis. Darius Simmons. Tamir Rice. Eric Garner. John Crawford. Kajieme Powell. These are just a handful of names of black boys and men killed in the past year. Not all of them. Not even close. These are the deaths that should have stopped the world. These are the losses that should have caused a giant intake of air as we all caught our breath in shock. But they didn’t. Some of these names you’ve probably never heard. Others you may have heard in passing but they likely became part of the white noise that makes up our everyday of information overload.

I sigh as I have to explain it to my children. Again. Yes. Another man has gotten away with killing a black boy. Yes, it’s crazy. Yes, it’s wrong. No, I don’t understand it either. No. You don’t have to worry about this happening to you. Because you’re white. But your friends? Some of them live in this reality. Those friends you meet at the park after school? The ones you eat lunch with every day? The ones you laugh with on the bus? Yes, honey, they have to worry about this kind of thing happening to them.

Don’t pity me this conversation. While I wish I never had a reason to explain the injustice that is the reality for too many, my conversation is not the difficult one. No. That burden belongs to the parents of young black people in our country. You are a threat simply because of who you are. Your dark skin makes people look at you as a threat. You have to defer and submit. Not as an expression of respect so much as a life-saving tactic. You must do everything you can to not pose a threat. Keep your hands visible. Don’t linger on the street. Don’t… don’t… don’t get killed.

Which part of this pisses you off?

Is it the part where the twisted wheels of justice contorted to comply with a standard of permissibility and excusability?

Is it the part where a victim is vilified?

Is it the part where protestors took their anger and frustration too far?

Is is the part where yet another unarmed black boy was killed?

Which part pisses you off?

I’m tired of waiting for our country grow up. I’m sick of waiting for my countrymen to stop acting like ignorant animals who only judge and assume and presume based on the most obvious of physical traits. I’m tired of wondering when we will start treating people as people. When we will recognize that our differences are completely superficial. When we will mature into rational intelligent beings who can differentiate between reality and perception. When we will stop acting like a petulant toddler who refuses to eat their dinner because their food is touching.

Our rationale is base.

Our reactions are primal.

Our mentality is antiquated.

As a whole our country is not mature enough to drive a car let alone carry destructive and deadly weapons.

And at the core of all of this? We refuse to even admit it’s a problem.

But we have grown men brandishing guns who still believe in the boogie man.

I wish I was exaggerating.

It’s not getting better. Sixty years after Emmett Till, it’s not getting better. The only thing that’s improved is the subtlety, the discretion. But it’s still the same story. Black boys are still being killed and white men are still getting away with it. Things look a little different, people speak of these things a little differently. A black man sits in the White House. But not much has changed. Because black men are still expendable.

I’m tired of waiting for people, for the masses, to wake the fuck up.

Here I am, safely tucked into my birthright. Secretly thanking the universe for granting me the immunity of paleness. Shamefully breathing easier that my son is not a threat by simply being in his own skin. As I sit here in comfort and security, I am pissed.

What about you? Which part pisses you off?