This is the Sixth in our Feminist Friday series, a collaborative effort with Gene’O (@Sourcererblog) and Diana (@parttimemonster) and Natacha Guyot (@natachaguyot) We’ve had some interesting, thoughtful, lively discussions over the last month. To see a roundup of the last five weeks’ discussions, check out Gene’O’s summary here.

This week I have the honor of hosting our topic and discussion. We will be delving into the issues surrounding female body image. The comment thread is open to any and all who want to participate. If you have thoughts or ideas, please chime in!

Louis CK is so brave. He is, really. He gets up on stage, he puts himself in front of the tv cameras. He does it even though he doesn’t have the rock hard abs of other actors. He is breaking ground… This sounds ridiculous, right? That’s because it is. To think that someone as funny and talented as Louis CK should hesitate to share his art with the world just because he doesn’t look like a Greek god, well that would be crazy. Yet this is the very attitude that has greeted talents like Lena Dunham and Mindy Kaling. They are breaking ground with their bodies. Never mind their brilliant minds that write, produce and act. Even for those women who have achieved status and recognition, it all eventually comes down to their body.

Is it any wonder that women struggle with their body image? The standards of beauty for women in our society trumps their intellect, their knowledge, their accomplishments. Hilary Clinton was derided when she started going without makeup and contacts while serving as the most travelled Secretary of State. Lena Dunham gets shamed for galavanting around nude on her show. She played ping pong. Naked. The horror! Mindy Kaling causes a stir when she says she doesn’t want to be skinny. Both women have been scorned for showing up on t.v. with atypical Hollywood bodies. And both have been hailed as heroes for showing up on t.v. with atypical Hollywood bodies. They are unapologetic about how they look. And that has people taking notice.

I applaud Lena Dunham’s attempt to “normalize” her body type (which is, in fact, NORMAL). But how sick is it that a woman showing a “less than ideal” body on t.v. is heroic? This is where we’re at, people. Being not model thin and having the audacity to show yourself is heroic. The standards of the female form have become so ingrained in us that we have all bought into it. We now see people like Dunham and Kaling and applaud them. We are applauding them for being. For walking around on this earth as themselves. Because they aren’t tall and thin. And that, my friends, is ‘effed up.

This all trickles down. Seeing women in the media being discussed in this way is absorbed by all of us. By our kids. We have become so accustomed to women twisting themselves literally and figuratively into a pretzel to try to fit into an unattainable ideal. And when we see these successful women not contorting themselves it’s kind of shocking.

The endless stream of images. We’re inundated with them. The magazines. The t.v. shows. The singers. The actors. We see before us  parades of women who have that perfect form. They pose in bikinis mere months after giving birth. They seem to be impervious to the changing female body that grows and expands and evolves as we age. So we look at that and think what’s wrong with me?

Dieting. Binging. Starving. Weight loss pills. These are the things many women resort to. Living a normal healthy lifestyle will not give most of us the model’s body. It is estimated that only 5 percent of women in the U.S. have the type of body that is shoved in our faces every day. And even they get airbrushed because “perfect” isn’t perfect enough.

So, here are some facts to chew on…

Are they in fact our bodies? Is their purpose to carry us through life, to carry children? Then why is so much importance placed on how the female body looks? If it is exposed, it must be to titillate, no?  Our society thinks it owns our bodies. It tells us how we should look. What we should or shouldn’t do with our bodies. What we can and can’t do with our bodies. Even the most utilitarian female body part- our breasts- have been co-opted. The body part whose sole purpose is to nourish a baby, has been sexualized to the point that women are shamed for feeding their baby in public. Our society, our media, is screaming at us “How dare you walk around looking anything but sexy and enticing and appealing? How dare you show a body part for any reason other than the pleasure of others?” We do own our bodies. But our culture hasn’t gotten that memo.

It’s enormous. Many of us feel defeated before we even exit puberty. We have been set up for failure by the expectations placed squarely on the shoulders and psyches of every woman growing up in Western society. I have seen friends, friends with beautiful curvy bodies, feel less than because of their natural shape. Most people can’t climb Mt. Everest. Only a small percentage reach the peak. So must of us don’t try, don’t even consider it something we should do. But women are trying to climb this steep rocky beast, the monster that is the “perfect body”.” And most of us will fail. Some of us will die. And some of us will make it…  approximately 5 percent of us. 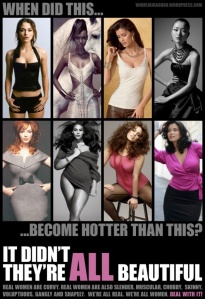 And now, the questions…

It starts young. Girls are dieting earlier. What changes can be made to affect this growing trend?

Why do you think the “ideal” body image has changed from the full figured, voluptuous woman to the “ideal” standards of thin that we see today?

Why does the media and society at large, put much more importance and emphasis on the female body vs the male body?

How much negative self image is passed down?