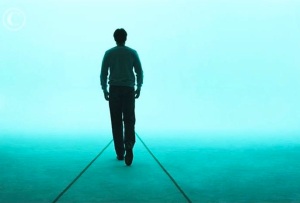 “Before you cross the street, take my hand

Life is what happens to you while you’re busy making other plans..

I like to think I’m a creative person.  I used to lay in my room for hours on end, on the floor with earphones on, music blasting, daydreaming.  I used to lay in bed at night long after everyone else was asleep, imagining crazy “What ifs”….  what if I’m lying in a coma right now and everyone and everything I see and know in my life is just in my imagination, one long weird coma dream?  I spent a lot of time in my youth thinking of alternate realities and outlandish ideas.

I have found that while I can imagine far flung scenarios and crazy hypotheticals, I can’t seem to imagine the most basic, impending life events.  I spend a lot of time trying to imagine the next thing, the next milestone, the next phase in my life.  When I was engaged I spent a lot of time wondering what married life would be like. When I was pregnant with my son I could not picture myself as a mom.  This baby that I so desperately wanted, was so excited to be having, seemed like a figment of my imagination.  I actually thought I would “wake up” and not be pregnant, not be in that life.  I almost expected it.  I almost expected to wake up and be in my childhood bed and realize that it was all a dream.

I did get married, I had my son and then two daughters. I didn’t wake up and have it all taken away from me.  Now I am the mother of a 13 year old boy.  I am the mother of a teenager.  Now I can’t imagine what this life is.  Not the future.  I don’t have time to consider him at 18, 25, or 30.  I am still trying to grasp the now.  I am still trying to reconcile the boy who is growing and changing and becoming someone new right before my eyes.

I am really proud of myself that I didn’t dissolve into an emotional puddle on his birthday.  I am usually pretty emotional on my kids’ birthdays.  I relive the days they were born…  This time, 10 years ago, my water broke…  This time 4 years ago, I wept with joy when they placed you in my arms….  I didn’t do any of that on my son’s 13th birthday.  We celebrated, we opened gifts.  I didn’t cry or get emotional.  I think that my brain was in protective denial mode.  I didn’t really think about the milestone we were celebrating.  My son’s first steps into teen-dom.  The beginning of him evolving from a boy to a man.  He is doing exactly what he’s supposed to be doing.  He’s finding his own way, finding his own voice.  He’s becoming his own person, separate for the first time from who my husband and I are.  He’s not emulating us or trying to be like us.  He’s figuring out who he is.

I don’t think anyone really prepares you for this.  You can read countless articles about parenting a teen.  The lamenting of the loss of innocence, the stress of keeping them safe from bad influences and dangerous situations.  You hear parents talk about the moodiness, the attitudes, the back talk.  Those are all things I expected to have to deal with.  I have been mentally preparing for all of those things.  How to squelch the bad attitude, how to prepare him to avoid danger and fight urges that are risky.  I really wasn’t prepared to see him differently.  He is still my baby, the little boy that would try to hold doors open for me as a toddler, the little boy who would climb on my lap and rest his head on my chest.  He will always be the little boy that was protective of me, who would often say, “Be ‘tareful Momma.”  The little boy who pointed out every god- forsaken truck we saw driving down the road.  In my mind he will always be that little boy.  But reality is smacking me in the face too.

I see him asking insightful and thoughtful questions about current events and injustices  around the world.  I see him taking interests in music and becoming a sports stats enthusiast.  I see him branching out and making new friends.  Friends outside our little bubble of a world that he has safely been cocooned in for over a decade.  He’s developing a whole life separate from my husband and I.

My natural instinct is to resist this, to keep him close to home, close to us.  But I know that I can’t do that.  It wouldn’t be fair to him.  He would likely rebel.  He would likely resent us.  So I find myself walking a on a very shaky tightrope.  Trying to grant him some freedom and independence while also keeping him completely connected to our family unit.  I want him to develop his sense of self, learn to navigate all of the tricky twists and turns on his own.  I am trying to do this while letting him know that we’re here to help him if he has questions about which way to go.

This is the hard part.  It was hard seeing him walk into the doors of Kindergarten, it was hard watching him take off to ride his bike around the neighborhood for the first time.  It was hard letting him go to his first sleepover.  But none of that compares to this.  Those were controlled situations.  I was able to be involved and monitor and manage all of those situations.  Now, I have to hold my breath and hope.  Hope that the last 13 years of us teaching him values will stick.  Hope that he will listen to his gut if he feels unsure about something.  Trust that he will make more right decisions than wrong ones.  And keep my fingers crossed that even though he’s going out into the world a little more and venturing into unchartered waters, that he’ll still want to hang out with us, that he won’t dread family time.

I know I’ll see him mess up.  He’s human, he’s still learning.  I know I’ll see him fall.  He’s going to get hurt.  It’s going to kill me to see that happen but we’ll be here to get him through it.  I haven’t even tried to imagine any of this.  I haven’t tried to tap into my creativity to think of the scenarios and try to prepare for them.  That would be a fruitless endeavor.  I have to let go of the reigns just a little and hand them over to him.  I have to let him have his own journey.  This is his time, not mine.  Not my husband’s.

I know that we’ve raised a good kid.  He is a sweet, caring soul.  He is smart and funny and I know he wants to make us proud.  That is the warm blanket of comfort I will wrap myself in as he makes his own way.  I still see that little boy when I look at him.  I still see the little boy I carried on my hip.  His eyes are just as big and brown and sincere.  He still has the same smile that can light up the room.  But I also see a young man.  A young man that will be taller than me in a matter of months.  A young man that could pick me up effortlessly.  A young man who seems capable of more than I’m willing to admit to myself.  I will let him go, just a little, because it’s what I’m supposed to do.  But I won’t stop mothering him and I won’t stop worrying.  When he walks out the door, I’ll still whisper to myself, “Be ‘tareful, son.”