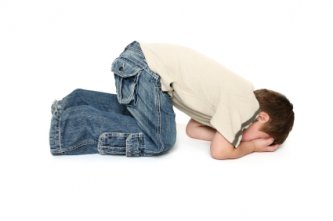 “Hanging on, You’re all that’s left to hold on to.”

Something I never thought I would do. I had never been hit as a child. Not spanked. Not “popped.” Nothing. My mom was able to raise three kids without laying a hand on any of us.

But I hit my son. I did it out of frustration and helplessness. And yes, anger.

My oldest, my son, was strong-willed. Feisty. Spirited. All the positive spin-words we could think of to describe his behavior and temperament. He was also a beautiful, sweet boy who filled my heart with more love and joy than I ever thought possible.

But he was not an easy kid. He tried me every day. From the age of two until he was about five years old.

He would throw fits in restaurants and have me dragging him out the door before the food had even arrived.

He would wake up from naps and scream and cry for over an hour. It was more than a tantrum, he was unreachable, enraged. I would carefully step around his flailing body to carry books and toys out of his room so that he wouldn’t throw them or hurt himself with them. I would stand outside his door with tears burning my eyes, the contents of his room lined up in the hallway, waiting for it to pass. I even recorded these fits of rage in case I needed to show them do his Pediatrician.

One day when he was three years old, he flipped out after we left a play date. He screamed and kicked my seat continuously as I was driving. I tried calming him down. I tried turning up the radio to drown out his screams. At one point I pulled over and parked on a side street. I felt like I was going to lose it. He screamed and kicked while I leaned my forehead on the steering wheel and took deep breaths. I sat there for a few minutes until the person who lived in a nearby house came out on their front porch to see what was wrong. They had heard his screaming from inside their house and were understandably concerned. I gave a small wave to acknowledge them and slowly drove away. He screamed the whole way home.

Often, in order to leave a park or a play date, I would have to hoist him up like a giant sack of potatoes, one arm clamped over his arms with my other arm clamped over his legs. He would kick and scream and hit. I would wrestle him to the car, re-adjusting and trying to keep my grip, all while getting hit and kicked.  He was almost stronger than me. He was a big kid, at four he was the size of most six year olds.

I cried on the phone to my mom on many afternoons. I asked her how to get him to respect me. I needed words of wisdom and some secret mommy tip that would help me, that would give me some control over my son. All she had were words of support. Encouragement that I was doing everything right. Assurances that if I kept doing everything right that he would respect me and that I wouldn’t always have to wrestle him into the car. I wanted to believe her, but I wasn’t sure.

Then one day I hit him. I “popped” him on the leg. He was bucking like a bronco refusing to let me strap him into his carseat. I spent the better part of 15 minutes trying to strap him in. Nothing was working. Exhausted and sweaty, I lost it and I hit his thigh and yelled at him in my ugliest voice. I’m sure my “pop” stung. I’m sure my words cut.

He paused briefly in shock and I watched his face change from defiance to sorrow. I saw his eyes speak of betrayal and shock. I knew I hadn’t physically harmed him. I knew the sting of my slap was momentary. But I had hurt him nonetheless. He started crying tears of sadness. I felt indescribably horrible.

I numbly climbed into the front seat to buckle in and drive. I felt sick to my stomach. I was appalled with myself. I knew I hadn’t done anything wrong. I knew I did what many parents would have done. But it didn’t matter. The tears being shed in hurt and defeat from the backseat were all the incrimination I needed.

This isn’t what I had wanted. This is not how I wanted to parent. It didn’t matter what was “normal” or “acceptable.” It didn’t feel right to me. At all. I didn’t want my son to behave or listen because he feared he would get hit or “popped.” I wanted him to do it because it was right. Because I’m his mother and he needed to listen to me.

I don’t want them to ever feel shame.

No good has ever come from shame.

I want to guide my kids. Teach them. I want them to learn self-control. Not control at the hands of a parent.

My son is 13 years old now. He’s a good kid. No, he’s a great kid. He makes mistakes. But he studies hard. He works hard. He’s considerate and respectful. He has not once, in 11 years of schooling, had a behavior issue. I’ve had other parents tell me that they hope their young boys turn out like him. He has a happy, easy-going nature and tons of friends who love him.

I’ve forgotten how scary and trying those early years were. As I write this, I’m so grateful there wasn’t a bigger issue lurking behind those screams and tantrums. Now, all these years later, I have an idea of what was causing his behavior. He was diagnosed with pretty bad allergies. Allergies that kept him stuffy and miserable year round. He also had some speech delays early on a learning disability that was stymying his communication. Once we started him on allergy shots and speech therapy and specialized tutoring, his behavior problems disappeared. Dramatically.

Knowing what I know now, I would be riddled with guilt if corporal punishment had been  part of our parenting.