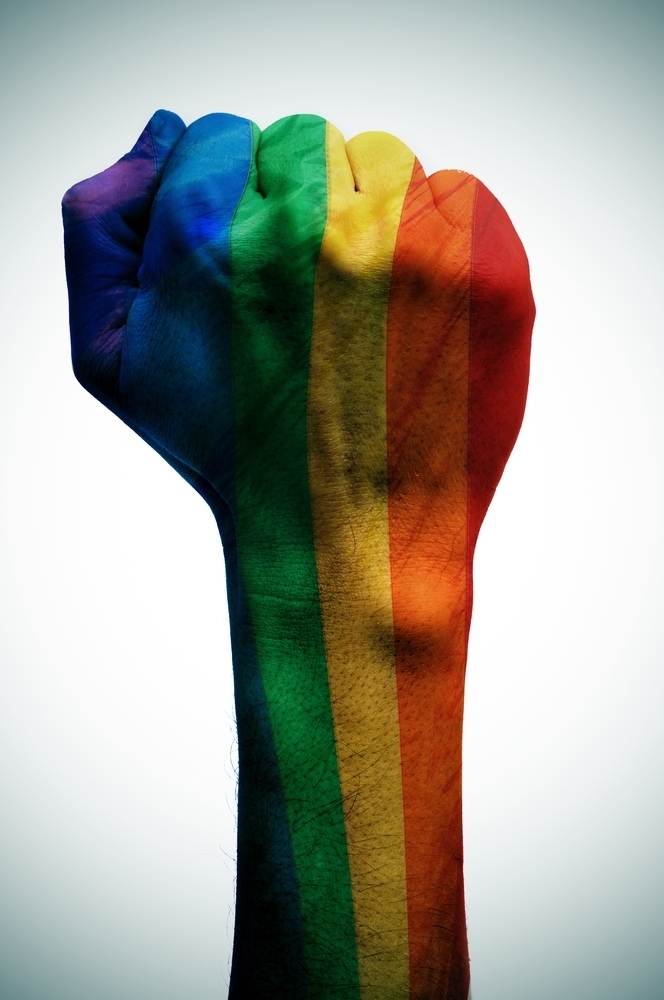 “Darkness has a hunger that’s insatiable,

And lightness has a call that’s hard to hear”

–Closer To Fine, The Indigo Girls

I believe that love always wins, that love will always defeat hate. This week that belief has been shaken.

Last Sunday, hate opened fire on innocent souls in their sanctuary. A gay night club was attacked. Hate drove murder into a place where love reigns.

Our nation is mourning. We are asking how this could happen. Why this would happen. We are trying to believe that love trumps hate. We are clinging to the feel good stories of heroes and community support. We are left wondering what we can do. Wanting to extend our love, to lift up the victims and the community, but feeling helpless.

Because our love is not enough. Yes, love can win. I still believe this. But love alone is not enough, not now. Not after hate came storming in on a Sunday morning.

So, it is with love that I say the following:

We need to fight.

We need to fight the hate that is becoming all too familiar in our country. Love won’t win if the loving people curl up on their couches and stay quiet. Not if we wrap our arms around each other but don’t raise our fist in the air in protest.

Now is the time to get loud. To get our hands dirty. To do some serious soul searching. To dig in and refuse to allow hate one more inch.

It means things are going to get uncomfortable. It means challenging beliefs and social norms. Norms that have been accepted in our country for too long.

The norms that say that being gay is a sin.

The norms that say that being gay is “unnatural.”

The norms that say that LGBT people are “freaks.”

Norms that give cover to parents who disown their children because they are gay.

Norms that say it’s ok for a clerk to refuse to grant a marriage license in the name of religious freedom. As if steadfast beliefs could actually be shaken by doing one’s job. Norms that allow good people to stand behind the clerk and support her bigotry.

Norms that have politicians saying that gay people adopting would be a social experiment.

Norms that have large religious organizations condemning a population of people.

Norms that have evangelists saying that hurricanes and natural disasters and even murder is the price to pay for homosexuality. Norms that allow these things to be spoken without widespread condemnation. Without their followers leaving their flock en masse.

Norms that repeat “Love the sinner, hate the sin.” A phrase used as a band aid for bigotry. Because bigotry is what it is when people themselves are classified as sins.

Think about that. A person is a sin.

That is hate. That is demonizing a whole population.

Apparently these things are ok to say.  To say it as a “belief” makes it ok. Hate cloaked in ideology. Hate under the veil of spirituality.

But make no mistake, it’s hate.

Words matter. Words spoken in houses of worship of many faiths matter. These words may not be said from a place of hate, but once spoken they become permission to condemn. To judge. To look down upon.

And for some people? To kill.

Hate is swelling as we speak. Hate is running amok out of fear, fear of progress and fear of change. We see more hate when rights are being given to people who have been oppressed. As we progress and we give more rights to LGBT, as most of us welcome and love our brothers and sisters regardless of who they are, without any concern for who they love, as we move forward and make progress on being a better, more inclusive society… we see more hate.

Hate doesn’t like progress.Hate will always try to stop it. Hate will try to keep things stagnant. To regress. To make America great again. Progress is the antidote to hate, so hate will call in the reinforcements and do everything it can to stop forward motion.

Hate needs fuel. It needs people to buy into it. It needs people to repeat tired and senseless words of oppression and judgement. Words repeated so often over the years. Repetition. Routine. Tradition. Hate that survives in our modern day out of tradition. Is that a reason to allow hate to continue? Is tradition so important that we won’t stand up to words that speak hate? Hate infiltrates the routine. It repeats softly, sings it’s hateful words with a sweet melody. Repeat after me…

But I refuse to give in to hate. I refuse to concede. I will call it out every time I see it or hear it. I will defy the sick social norms we’ve all become accustomed to.

Hate under the guise of beliefs has a long history. It was hate when interracial marriages were considered against “natural law.” It was hate that allowed Nazi Germany to commit genocide. It is hate that radical Islamic extremists employ to stone gay people to death. It is hate when Vladimir Putin jails people for being gay. It is hate when the influential American Family Association advocates criminalizing LGBT, advocates abducting the children of gay couples, among other despicable things. And it is hate when fundamentalist Christianity decries homosexuality as a sin.

It means challenging people you may respect. It means calling them out. Saying “No more.” It means not tolerating hate speech.

Love sometimes means fighting. Hate doesn’t play fair. We can’t hug our way to a better place. The Civil Rights Movement didn’t make groundbreaking progress by disassociating and only looking at the positive. Martin Luther King, Jr. fought hate and injustice. He challenged notions that were being defended as faith. He advocated for love and peace while fighting oppression. He did it eloquently and fervently and loudly.

You can fight in the name of love. Change doesn’t happen with a whisper.

Carry love in your heart while you shut down the hate you see and hear. Let love be the reason you decide No more. No more hate under the guise of faith. No more co-opting something we hold sacred to further an agenda. No more tolerating bigotry, no matter where it comes from. No one is above reproach in this battle.