Lessons From the Worst Day Of My Life 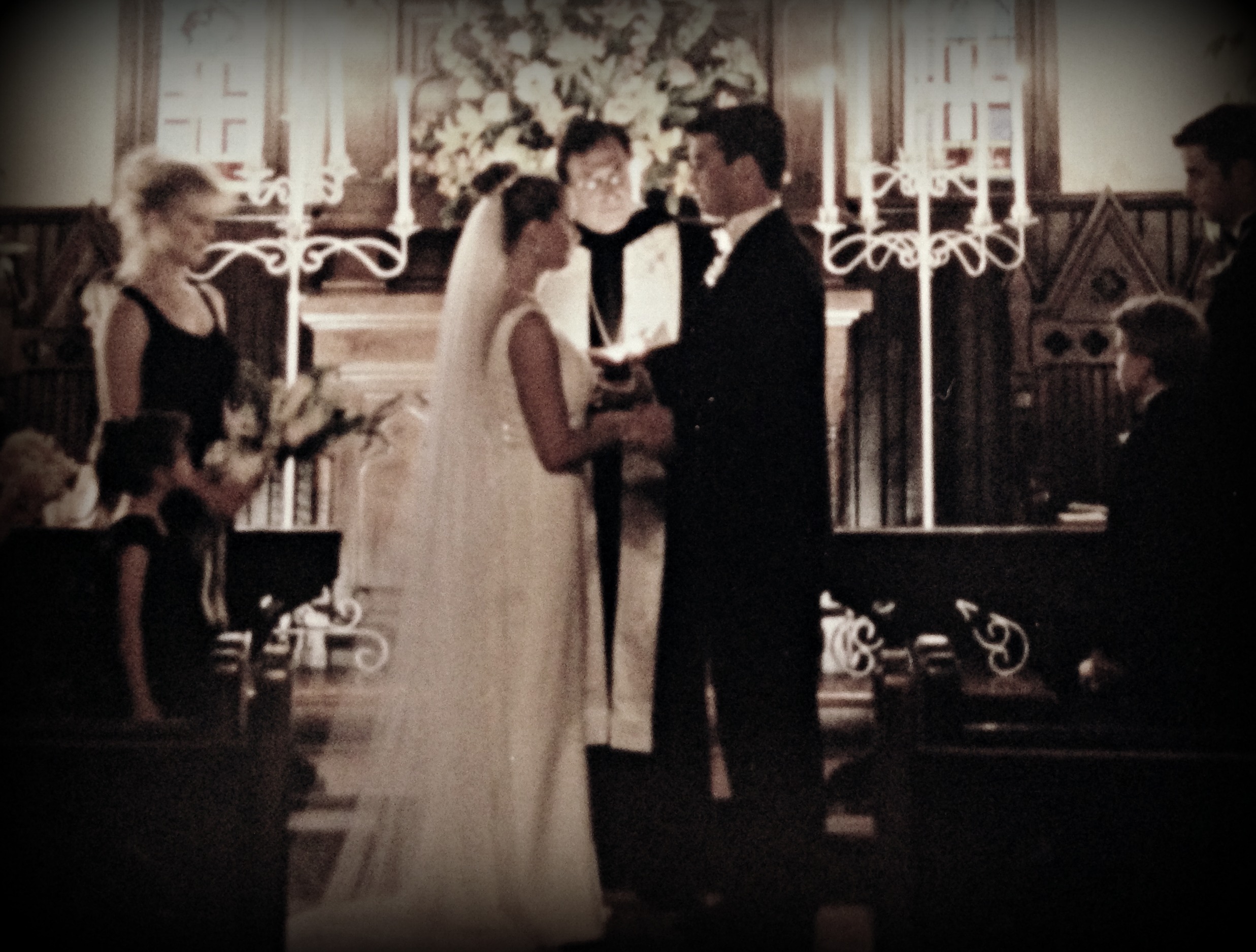 It was my wedding day.

I found myself standing outside the doors to the chapel. My heart was racing. Pressure began building inside and I felt my eyes fill up with tears.

Before I could turn and run, the doors were flung open. I was caught off guard as 80 expectant faces turned to look at me. I scanned the crowd….  I saw my family and friends…. I saw my Dad and Stepfather waiting in front of the alter to give me away.

But I was going to have to walk down the aisle alone.

And that’s not how it was supposed to be.

I don’t know how long I paused there. I felt like I couldn’t move.

Then my eyes found Joe. And right next to him a single candle burning on a tall candelabra. Gulp. I looked back at Joe and knew that if I could make it to him that I would be o.k.

I took a tentative step. I felt as if my knees were going to buckle. I took a deep breath and willed myself to move. Somehow I began walking. It was surreal. I felt as if I was floating down the aisle….  Something was propelling me forward.  I felt a sense of calm. A sense of warmth and serenity that I hadn’t felt in 18 months.

Eighteen months earlier, my 16 year old brother had been diagnosed with a rare pediatric bone cancer.

The diagnosis was grim. The prognosis was not good.

Ten days before my wedding he lost his fight.

That was the day my world forever changed. Nothing would ever be the same. The damage was irreparable. I felt gutted, depleted and seething with heartache.

Fifteen years later I still look back and I don’t know how my family and I made it through a funeral and a wedding. But we did. We somehow walked through it together, feeling our way through a fog of pain and grief.

There would be no postponing of the wedding, as I’d suggested. I couldn’t imagine waking up in a world without my brother, let alone throwing a wedding. Every single member of my family told me in no uncertain terms that my brother would never want me to put it off. He always said he “didn’t have time for cancer”, he didn’t let it stop him from doing the things he wanted to do.

And he would be highly pissed if I let cancer stop my wedding.

So, we pulled it together and summoned our strength. Even though we were still in a state of shock, we had a wedding. There were tributes to my brother throughout the wedding. The single candle stood where he was supposed to stand as a groomsman. There was a beautiful poem in his memory read during the ceremony. His favorite song was played at the reception. And we danced. And we drank. And we had fun.

Inexplicably, we had fun.

Fifteen years have passed since that day.

Fifteen years later and I’m still trying to figure out how to move through life without him.

Fifteen years later and I’m still learning how all of this works… the after part.

And even though I’m sometimes exhausted by all that I’ve learned from that day, I know it’s important to pull my head out of the sand. I know I need to pay attention to all that grief has taught me.

I would gladly trade the things I’ve learned to have my brother back.

But I learned a long time ago that bargaining doesn’t work.

So I choose to appreciate the lessons I learned.

I learned to cut people some slack.

There were the times that I would find myself driving 15mph in the left lane. I would be lost somewhere between grief and exhaustion after a long night at the hospital with my brother. I would arrive home with no idea how I got there.

There were times when I’d look up distractedly at the grocery store to realize I’d been standing in the middle of the aisle lost in thought.

I used to be that person that would honk impatiently and cast a dirty look as I zoomed past a slow driver.

I learned what it was like to really have a bad day. To be so lost in a world turned on it’s head that you could be completely unaware of your surroundings.

I learned that we all have bad days and some of us have really bad days.

Some of us are just trying to make it to tomorrow.

Now I see people differently. I don’t see people who are trying to get in my way. I see someone who may have heavy things weighing on their mind. I’m sure many people granted me that grace, and I’m grateful. I was so fragile and raw that to be confronted by an impatient driver or shopper would have been too much.

Compassion and grace isn’t giving people a pass when you know they’re suffering.

then it’s not truly kindness.

I didn’t get this before. I wasn’t cruel. I wasn’t mean spirited. But I was impatient. I was easily irritated. That was before I realized the depths that people can be trapped in and look completely normal to the rest of the world.

I learned that comfort  sometimes comes from unexpected places.

There are some people who had such an impact on me, who helped me through difficult times. They probably will never know the significance of their actions.

The soft-spoken coworker who offered me a hug as I was leaving to meet my family at the hospital. We were meeting with doctors to get news of test results. He knew I was nervous. When my shy, reserved friend wrapped me in a big bear hug I was overcome. I knew this small gesture was not easy for him to give. His effort to offer me solace moved me. It reminded me that even though my coworkers didn’t know my brother, there was a whole team of people rooting for him.

There was my brash, loud, jokester boss who let me take off as much time as I needed to be with my brother at the hospital.

There was my friend from work who calmly assured me that I would feel joy again after I tearfully confided my fear and pain to her.

Then there’s my husband’s brother and my sister in law who drove 12 hours to attend my brother’s memorial service.

My sister in law was the person I leaned on during that service. I found myself opening up to her and this was only the second time she andI had met. She helped me get through an emotional night. She seemed genuinely touched by the stories she heard from my brother’s friends. She said that he sounded like an amazing person and she felt like she kind of knew him after hearing about his antics.

I almost collapsed with gratitude. Her words gave me hope that my brother wouldn’t be forgotten, that his spirit and his humor could be translated to people who’d never met him.

I learned that an act of kindness, no matter how small, is never wrong. Sometimes it’s the thing that can help someone put one foot in front of the other. Sometimes it can make all the difference in the world.

I’ve learned that you can, even 15 years later, be blindsided by the cruel reality of it all.

You can be sitting at your kid’s swim practice just trying to write in your notebook when a memory you’re writing about simply knocks the wind out of you and next thing you know you’re wiping away tears hoping no one notices.

You can be eating dinner at a restaurant and the waiter looks just like your brother. You can’t stop looking at him. You feel the loss and pain take over and overwhelm you. You are again surprised at the cruel force of grief’s ability to blindside you. And you almost want to stalk the waiter just so you can pretend for a minute that your brother’s still here.

You can watch your kids doing something especially mischevious and your thoughts unwillingly flicker to images of your brother. Memories of the antics of a little boy long ago. And then, imagining what could have been. Him egging them on, encouraging their exasperating behavior.

And you can almost hear him laughing, enjoying every second of finding a way to torture you as an adult as he did as a little kid.

And your heart hurts because you know he would have had so much fun with your kids and they would have loved their uncle so much.

You could bottle yourself up and try to insulate yourself from it, but it’s not going away so you might as well let it happen.

And I’ve learned that I still feel my brother’s presence.

I see him in each of my children, in their personalities…  in their sense of humor, which is what my brother was known for.

I feel him sometimes. I feel the hair on the back of my neck stand up. I feel a warmth come over me. A warmth hard to describe because it’s unlike any sensation I’ve felt before.

I feel him when my family is together and my sister and my parents are laughing and we’re giving each other a hard time.

I feel him kicking me in the ass when I’m about to chicken out on doing something that scares me.  I can almost hear what he would say in those situations.

Don’t give up. You’re better than that.

I’ve learned to recognize these moments, when I feel him with me. They are bittersweet. They are welcome. And they tug at my heart because they will never be enough.

My brother was supposed to walk me down the aisle.

But in the end, I decided that my brother was who I had chosen to walk me down the aisle.

There was no understudy.

There would be no last minute stand in.

I couldn’t imagine replacing him in that role.

I didn’t know how I was going to manage making that walk without him. I didn’t have much time to dwell on it.

And what I’ve learned is that there didn’t need to be a replacement.

My brother showed up.

He kicked me in the ass a little and told me not to be scared. He reminded me that I didn’t have time to let my pain stand in the way of my wedding, my happiness.

My brother showed up…

he  was there with me on one of the best days of my life.