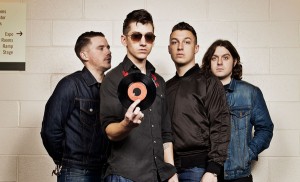 “I guess what I’m trying to say is I need the deep-end, keep imagining meeting, wished away entire lifetimes, unfair we’re not somewhere misbehaving for days” -R U Mine, Arctic Monkeys

Bad. Ass.  Sums it up, the new Arctic Monkeys album released last week.  I was expecting to be non-plussed.  I just couldn’t get into the earlier songs by the best selling debut artist in British Music History.  They weren’t my cup of tea (lame british reference).  I decided to give it a listen since they will be playing the Midtown Music Festival and I am humming with excitement about going.

The first song I listened to was “Do I Wanna Know”.  I’m hit with a marching drum beat, a guitar sludging out a haunting melody.  “Have you got colour in your cheeks?”  Hmmm….    Let me just say I’m a sucker for a hard drum, a gritty guitar, and a british accent.  This song can’t be listened to loud enough.    Taunting and desperate at the same time, “Have you no idea that you’re in deep”,  “Crawling back to you, ever thought of calling when you’ve had a few?  Cause I always do…”  desperation never carried such swagger.

“Arabella” has a 70’s rock vibe.  The chorus has some Jimmy Page – Robert Plant style back and forth that makes you sit up and take notice. “My days end best when the sunset gets itself behind/ That little lady sitting on the passenger side/ It’s much less picturesque without her catching the light/ The horizon tries but it’s just not as kind on the eyes.”  It’s a kaleidoscope of words and music that comes together in an unexpected way.

“No. 1 Party Anthem” offers a departure.  I can’t help but picture a bubble haired girl leaning her head against some guy’s chest as they sway, popping bubble gum  in melancholy unison.  A doo-wop style song about the last ditch hook-up before the club lights come on.   An ironic song, it still comes across as heart-felt.

“Knee Socks” immediately brings to mind David Bowie’s “China Girl”, yet somehow shedding the cheesiness that you would think would accompany such a comparison.  The traipse through a rainy afternoon frolic ” Well you cured my January blues, yeah you made it all right, I got a feeling I might’ve lit the very fuse you were trying not to light” eventually evolves from China Girl to Ziggy Stardust with a delicate layering of ethereal crooning over a jaunty chorus.  The unexpected is welcome.

I couldn’t help but include “R U Mine”, not technically on the new album, but released as a teaser,  a prelude perhaps, and a song I can’t get enough of.  A little slicker than “Do I Wanna Know”, but heavy hitting all the same.  Fueled with desire and angst, it is driven by lyrics that come like a barrage of bullets.  The music tries to keep up with the fierce urgency of the ultimate question, “And the thrill of the chase moves in mysterious ways, so in case I’m mistaken, I just want to hear you say you got me baby, are you mine?”

This album had me with the first pounding drum beat, but as I listened and heard the fervor that accompany’d the narration, I was hooked.  Lyrics often get lost or overshadowed by the music, not here.  The sheer talent to bring together music and words in equal standing…  that’s the bliss point.

Lessons From the Worst Day of My Life