The Good, The Bad and Making This Place Better

-Lenny Kravitz, I Build This Garden For Us 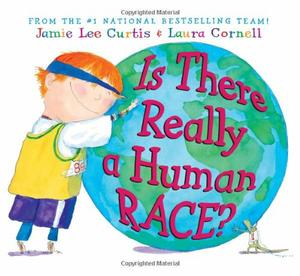 In the book a little boy is asking his mom about the “human race” we all participate in and what is it really all about… she answers with this “Shouldn’t it be looking back at the end that you judge your own race by the help that you lend? So, take what’s inside of you and make big, bold choices. And for those who can’t speak for themselves, use bold voices. And make friends and love well, bring art to this place. And make the world better… for the whole human race.”  On the last page there is a drawing of a Muslim and Jewish man sitting together on a park bench playing “Go Fish”. I choke up every time I read it to my kids.

It’s so easy to get overwhelmed and bogged down with all of the crap happening around us. Just reading the news is enough to put anyone of us in a depression about all of the negativity and evil and hatred in the world. But, there is good out there. There are some really amazing people doing really amazing things. There are people performing small acts of kindness, right now, all over the world. It’s out there, it just doesn’t always make the evening news. After writing my recent posts about racism and online misogyny and bullying I felt like I was in need of some reminders about The Good. I do believe The Good outweighs The Bad. I may write a little more about The Bad because those are the things that get me fired up and pissed off and that’s when I have to write. The Bad will always get more airplay and screen time. And it should, because we have to write about it, read about it, talk about it if we ever want things to change. But sometimes The Good deserves a little lovin’ too. A little publicity can maybe result in a chain reaction, inspire us to do our own Good.

A few months ago I stumbled upon this picture:

Pretty powerful picture, right?  The look on this woman’s face, the ferocity with which she is protecting this man, the way the man is cowering and protecting himself…  it’s a picture that says so much. What’s even more powerful is the story behind the picture. The KKK was holding a rally in Ann Arbor, Michigan in 1996. Many people showed up to peacefully protest the presence of the Klan. This man was spotted with an SS tattoo, wearing a Confederate Flag shirt. 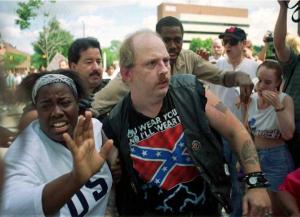 The peaceful protestors broke through the barricades and chased this man down, attacking him. Their anger is not hard to understand. Here is someone who represents everything most of us consider evil and hateful. Keshia Thomas, only 18 years old at the time, threw herself on top of the man to protect him from the crowd. Protesters were beating him with their placard signs and she threw herself into the line of fire to protect someone who by nature of his affiliations hated her because of her skin color. Someone who would likely rather see her enslaved or killed, if the flag shirt and SS tattoo are any indication. She exhibited courage and conviction with her actions. This picture tells a beautiful, unexpected story from a day that was intended to represent hate and ugliness by those holding the rally.

Then there’s this picture:

Members of Westboro Baptist Church in Kansas were protesting at Washburn University in Kansas. Josef Miles was visiting the campus with his mom when he saw the protestor’s signs. He used a notebook and scribbled the message “God Hates No One.”  This boy, only 9 years old, stood up to the hatred these people were spewing and staged his own counter protest.

His mom said she’d “Never been prouder” of her son, “Those people are scary but he stood strong, was respectful and stood by his convictions. He will be a good man, I have no doubt. I got my Mothers Day present early.”

Last week I saw a story about a special needs teen, Mitchell Marcus, who was the team manager on his high school basketball team. During the last game of the season his coach put him in the game with 90 seconds left on the clock. The teammates and the coach wanted the avid basketball fan to have his chance to score a basket during a real game. Mitchell took his shot and missed, tried again and the ball went out of bounds. The opposing team, his school’s rival, now had possession of the ball. Then something amazing happened.

Jonathen Martinez passed the ball to Mitchell and said “Shoot it, it’s your time.” Mitchell again shot and missed. The opposing team stood back and let Mitchell take three more shots until he finally scored. The crowd rushed the court and lifted Mitchell onto their shoulders. The rival team sacrificed their chance to win the game, opting instead to let Mitchell fulfill a dream.

These stories are reassuring. Comfort that in the midst of ugliness, there’s beauty. Comfort that The Good outweighs The Bad. Hope for the optimist in us that we’re not fools for believing in The Good. Because there’s also this:

And to return the favor: