This Discrimination Is Still OK

“Pardon me while I burst into flames,

I’ve had enough of the world and people’s mindless games.

Pardon me while I burst and rise above the flame.

Pardon me, pardon me. I’ll never be the same.”

We live in a world where discrimination still happens but it often happens in the shadows. It is done in the way cowards typically do things- when the world isn’t watching or paying attention. And it still happens far too often. But there’s one type of discrimination that is totally acceptable to flaunt, to declare with authority and smugness.

It’s still acceptable to shame the poor. It’s totally ok to stand up in the U.S. Congress and sneer about the “takers.” It still o.k. to go on Sunday morning talk shows and wear an unholy mask of disgust and contempt while talking about welfare and entitlement programs. This is all fine. You can do this and still be a regular guest on a news show. You can do this and still get elected to be a political leader. In fact, some people will vote for you for this very reason.

One very powerful Congressman recently said the school free lunch program gave students a “full stomach but an empty soul.” Because anyone who’s ever gone hungry knows that you need to feed your soul. I mean, that’s top on the list of concerns for a hungry child who’s trying to make it through a school day with a growling stomach eating away at his concentration. That is a priority in a life of not knowing when your next meal will come. More than one political leader has suggested that poor kids do janitorial work in exchange for free school lunch. They say that this will help those kids to understand that you must pay for things. That things just don’t come easy. Because, you know, poor kids are so entitled. They don’t understand the value of hard work. Especially when they watch their parents work two jobs and struggle to pay the bills. So, let’s have the poor kids sweep and mop and scrub toilets. While their wealthier peers look on and eat their lunch that I’m sure they worked very hard for. Some people actually think this is a good idea. Teach those little free-loaders that life ain’t easy. 16.1 Million U.S. children live in poverty.

A Combo Meal of Discrimination

Recently, one very powerful Congressman got flak for saying this:

“this tailspin of culture, in our inner cities in particular, of men not working and just generations of men not even thinking about working or learning the value and the culture of work.”

His assumption- that there were entire swaths of people who have no desire to work, who wanted to receive handouts- was not the problem. The problem was his use of the words “inner cities,” a.k.a., minorities. Yes, this comment was one of those underlying racist comments, indicative of a mindset so entrenched that the speaker doesn’t even realize it’s racist. And it should be derided. But the outcry shouldn’t have stopped there. In one statement, this politician managed to dismiss two disenfranchised entities. It was a two-for-one. But it’s ok to shame the poor, so his comment was called out for being racist, when it should have been called out for exactly what it was. Racist and poor shaming. It should have been called out for the bullying tactic that it was.

Recently, Karen Weese wrote an insightful article on poverty. She gets to the heart of what it feels like to be on the fringe. She illustrates the perceptions that exist and pokes holes through all of the standard theories. But where she really got me was when she discussed “The Ramen Noodle Effect.” She explains that many of us can point to times in our life when we can all relate to being “poor.” Those years post college of living on thrift store furniture and eating 25 cent packets of noodles. But this is a false equivalency. Having a few years of living in a run down apartment is not the same as growing up poor. Surrounded by a family and community in poverty.

“It is much easier not to panic about tight finances when Mom and Dad have a guest room you can always move back to (even if you never actually do)…. It helps when there’s someone in your family who can advise you about applying to college or buying a home. It’s reassuring to know that, no matter how bare your cupboard, there will be a full spread of food when you go home for the holidays, and family and friends who can help you, standing in the wings.”

It’s not the same. Working in a minimum wage job for a few years as a teenager does not give you insight into the lives of people who spend a lifetime in those jobs. Your stepping stone is someone else’s tenuous life line. Your “character building” position as a dishwasher or fry cook is someone else’s shaky grip on survival. Sleeping on a mattress on the floor for a few years isn’t equal to growing up sharing a bed with three siblings or finding yourself sleeping in your car. Digging for change in the crevices of your sofa for Starbucks isn’t the same as juggling finances to figure out which bills get paid this month. Selling your old shoes or clothes at the consignment store for beer money isn’t the same as selling plasma every month to pay medical bills. 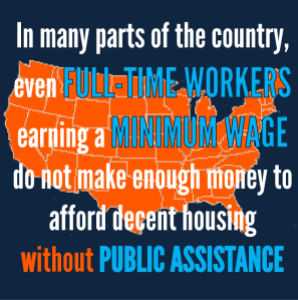 The things people say when discussing the poor. They harken to Dickensian times. “Lazy. Victims. Takers.” These words are used to dehumanize an entire group of people. These words offer justification and comfort to those who wish to keep the poor exactly where they are. Poor people are fundamentally flawed, in character and morals. They don’t want to have better or to do better. They want a hand out or a hand up or a free ride. They enjoy this lifestyle. If they were motivated and ambitious and resourceful they wouldn’t be in this position. These are the statements that are repeated. They are hollow excuses for disdain. They are the rationalization for judgement. They are the lame attempts to lift oneself higher while stepping callously on the backs of those already crippled with exhaustion. They are the words of bullies.

Some people seem to lack the imagination to understand any circumstance they haven’t personally experienced. They are so self involved and egocentric that they can’t be bothered to consider what any other reality may actually be like. Maybe they were spoiled or grew up so isolated from people who were different. Can we really blame them for their obtuse view on life? Yes. Yes we can. We live in an age of information and access. One only has to spend a few minutes listening or reading to hear what other’s reality is. One only has to pay a tiny bit of attention to the person cleaning up after their office closes or caring for their elderly parent. It doesn’t take much effort at all to shed the notions bred by ignorance to see the good in people versus the bad.

Some people like to think that they have arrived at a place because they are better than. And those who haven’t reached that place must be less than. I was poor. I pulled myself up by my bootstraps. Sure you did. But perhaps you fail to recognize that not everyone experienced life in exactly the way you did, in the same exact circumstances. Perhaps you worked super hard. And perhaps you had a little luck. Perhaps there was someone who gave you a hand up. Perhaps there are some people so caught up in the downward spiral of poverty, scratching and clawing to feed their children and keep a roof over their head that “bettering” themselves isn’t on the bare table they face every night. Perhaps your experience isn’t exactly the same as someone else’s experience. Perhaps you could use your experience to try to be the one to extend a hand. Perhaps instead of tearing people down because they didn’t arrive at the same place you did in the same way you did, you could offer help or encouragement.

Whatever the reason, it needs to stop. Heaping shame and humiliation on those living in poverty isn’t productive. No one has ever solved a problem when coming from a place of judgement and contempt. But the bullies don’t get this. The bullies need to be called out. We tell our kids to stand up for those who can’t stand up for themselves. We tell them to “Stand Up and Speak Out.” Maybe it’s time for us to say something. Most of us are good people. We’re appalled when we hear racial epitaphs. We cringe when we hear a sexist remark. We wince when we hear a gay slur. It’s time we started reacting to the words and actions used against the poor. It’s time we stop accepting the false arguments that have been touted as justification for poor shaming.

Vernacular can be changed.

Mindsets can be altered.

Empathy is a skill that can be learned.

Kindness can grow and spread.

Assumptions can be examined.

Poor shaming can be called out as discrimination.

We can stand up.

We can speak out.