“Every breath you take, every move you make, every bond you break, every step you take, I’ll be watching you”

-The Police, Every Breath You Take

To Elf or not to Elf…  That is the question.  I have to confess, I’ve been a bit of a scrooge when it comes to this Elf on the Shelf phenomenon.  My two older kids were a little too old to buy in to it when it first caught on.  They still asked me to buy it, but I scoffed.  I told them they didn’t want a creepy dude in little felt pajamas watching them all the time.  Dolls with that wide eyed perpetual smile are scary.  And he’s never looking you in the eyes…  he’s hiding something.

I also think that Christmas involves enough work for me.  Why would I add one more thing to my to-do list at the busiest time of the year?  So the kids can have a little more “magic” at Christmas time?  Please!  This time of year is crammed full of kid-centric shows, songs, parties, decorations, candy, gifts….  it’s already overkill, over stimulation, over the top.  My stance has been firm on this.  I have bucked the peer pressure of the other moms I know who strategize cute little shenanigans for their elves.  I’ve withstood the torrent of questions from my kids when their friends are around, Mom!  Why can’t we have an elf who throws Cheerios around the kitchen like Suzie?  Because, that’s your little sister’s job sweetie.  I’ve refused to join the Pinterest explosion of adorable and creative Elf on the Shelf ideas.  Some of them are worthy of some kind of crafting award.  But geez, the work in dreaming up these ideas and then executing them?  I would be a huge disappointment to my kids every morning if I tried to pull this off.  My kids have already had to learn that the Tooth Fairy is very busy and sometimes the tooth will have to stay under the pillow for a few nights before she shows up.  My creative juices would go more towards making up reasons that the elf didn’t move during the night.

Then, my friend sent me this picture: 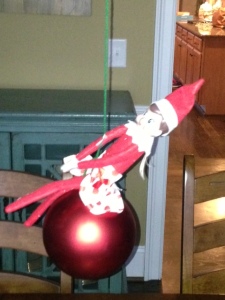 I laughed so hard I almost dropped my phone.  She let her teen age daughter take over the elf shenanigans for her little sister.  In case you have taken a year long pop culture sabbatical, this was the reference for this particular elfin fun:

I started thinking that maybe I had missed an opportunity for some fun at the expense of my kids’ innocence.  By this I mean my four year old’s innocence.  My two older kids have already been corrupted.  But I could enlist their help.  I could let them scheme together on this whole “elf” thing and it would be a good bonding experience for them.  And it would totally be entertaining for my husband and I to see what they come up with.  Anyone who knows me knows I love inappropriate humor.  It’s one of the reasons I married my husband.  It’s why Louis C.K.’s “Of course…..  but maybe….”   routine is the funniest thing I’ve ever seen.  So I could totally get on board with Elf on the Shelf gone bad.

There is so much you could do with inappropriate elf….

But, after thoroughly considering the options I have decided that this little sociopath will not be taking up residence in my house.  He’s still creepy.  My four year old is freaked out over the idea of Santa coming in to our home on Christmas Eve and the Tooth Fairy sneaking in to her bedroom when she looses her first tooth.  I think a whole month of this little stalker watching her would traumatize her.  Also, I don’t really want to know what kind of stuff my older kids would come up with when given free reign with a posable doll…  They’re good kids, but when I mentioned it to my daughter, she did the evil villain grin that indicated the she already was conjuring up some unsavory ideas. 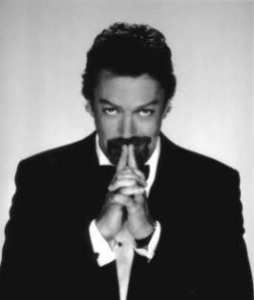 Better to live in blissful ignorance just a little while longer as to the depths of my kids’ burgeoning depravity….  So, enjoy your elfin magic all you innovative and productive moms and dads out there.  I do not begrudge you your elf antics.  I applaud your cleverness, your tenacity, your commitment to your kids’ fun, but I especially applaud your sick sense of humor.